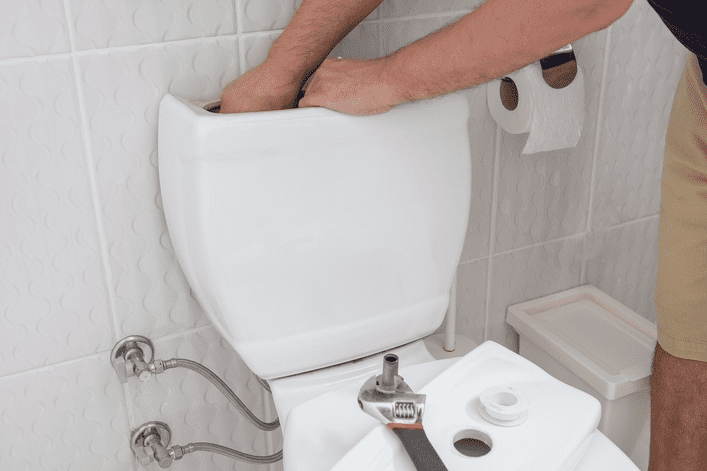 Bathroom drain pipes channel out the toilet’s wastewater and are usually separate from the cold water supply pipes that bring water into the toilet. During chilly winter, the supply pipes might be frozen, causing you only to flush the toilet once. Afterward, you may have to manually add water to the toilet tank to flush your toilet. And if the drain pipes are blocked due to freezing, you can’t flush your toilet. This guide shows you how to flush a toilet when pipes are frozen to avoid any ugly inconveniences during winter.

This winter headache doesn’t usually occur in the morning, but it can happen at any time. Unexpectedly, a sudden drop in temperature can cause pipes in your bathroom to freeze while you’re at work or gone for the weekend. If you get some help now, you’ll be able to avoid having water damage after a hard freeze. Here are some common problems associated with frozen pipes and how to handle them:

There is less chance that the drain pipes will freeze, but if it happens, avoid flushing the toilet because the water will back up into the bowl. If you keep flushing until it is clear that the toilet water can no longer exit through the pipes, it will end up spilling on the floor. One way to melt the ice in your toilet drain is to pour a large bucket of hot water down the drain.

When cold weather blows in, and pipes freeze, one of the things that can happen is that a vent stack or a main line can become blocked. It could cause a backup in your toilet, meaning that you won’t be able to flush the toilet. In some cases, the drain on another bathroom fixture — such as a bathtub — will back up with water.

To get your toilet to work again, insert the cable of a toilet auger, also called a plumbing snake, under the ridge of your roof. This will allow you to reach the blocked pipe and remove the obstruction. But if you have frozen pipes, it may be difficult to maneuver your roof because of ice and snow that may have accumulated. You may need to call a plumber to help you do this.

If your water supply pipes are frozen, you can only flush the toilet once unless the water in the tank is frozen too. The frozen pipe will prevent water from flowing into the toilet tank to fill it, and it will cause the water level in the toilet bowl to be very low.

You can pour hot water down the drain to help freeze a toilet’s drain pipe, but you can also use other methods to try to thaw out frozen pipes. And if you don’t try to free frozen pipes, waiting for them to thaw out on their own can take several days.

Turn on the sink faucets close the toilet to let hot water flow through the pipes. Start thawing the pipes closer to the faucet. For pipes hidden beneath closed doors in a cabinet, turn the heat on in the room where the pipes are and open the doors, so they are visible. If a pipe is already thawed, put some hot water over it to warm it. You can move a portable electric hair dryer across frozen pipes.

How to Deal with a Frozen Toilet

When pipes freeze in your house, it is usually the water lines that feed the toilet that cause the most problems. Toilets won’t flush if there are frozen pipes in the lines that feed the water supply. You can flush the toilet once using water that’s in the tank, but you have to pour water from the other tap in the toilet bowl to force water to flow through the pipes again. This will cause you to continue to have problems until you can get warm water to warm the pipes.

Sometimes toilet plumbing runs through a wall to a wall and into your house. It makes sewer installation and maintenance easier, but it can cause pipes to freeze because they aren’t well insulated. There could be a freezing point on the toilet lines and at the pipe junction where it connects to the other pipes in your home.

Sometimes thawing out a frozen toilet is a tough endeavor. If you have access to frozen pipes in your basement or crawl space, try these easy-to-use DIY tests to see if pipes are frozen.

Reaching frozen toilet pipes inside a wall is hard without ripping out the sheetrock. If you can’t access frozen lines yourself, call a professional plumber.

More often, rising temperatures outside your house allow you to thaw out a frozen toilet pipe that causes the toilet to stop working. You can help by opening all the doors in your bathroom and turning on the furnace. If this method works, you should install better insulation around your pipes ASAP.

A Step By Step Process to Thawing Frozen Pipes

If you have a frozen toilet that is not filling the tank, the only thing that can be done to address the problem is thaw the pipe. Once the pipe is thawed, you can take preventative measures to ensure it doesn’t happen again. If your pipes are frozen, there is no way that water can go down the toilet. When ice freezes inside a pipe, it acts like a watertight seal, and if that seal is not broken, no water can get through. There are several different ways that you can thaw the pipe to allow water to flow through it. You can choose the method that works best for you.

Tools You Will Need

If you just can’t get warm enough to help the toilet flush again, you can try one of these five easy steps to get warm water in your pipes to allow water flow.

Locate the frozen pipe that delivers the water to the home. If the pipe is located in a crawl space or a basement, you can tell which pipeline is frozen by looking at the places where the pipelines run, such as where they run near or against the outside wall. Trace the pipe that runs from the toilet tank to the ground, and feel it go down the pipe to the place where it connects to other pipelines.

Check the temperature of the pipe to see if it has got any warmer because you will be able to tell the difference in temperature between a pipe that has frozen and an unfrozen pipe. At the point where the pipes from the toilet come together, the toilet line has likely frozen.

Turn the heat setting to low on a hairdryer, and blow hot air from the dryer onto the frozen line. Do the same thing repeatedly along the pipe until the pipe is heated to the touch and water starts to flow from the toilet tank.

Now set a heating pad on the “Low” temperature mark and wrap it around the frozen pipeline.

Use a space heater to heat the room and thaw the frozen pipes in the basement. Small spaces will benefit the most from this solution. If you have a very large basement, direct the heat much closer to frozen pipes.

For pipes that freeze easily, just put some heat tape on the pipes to heat them and install a thermostat to control the temperature. Plug in the heat tape to keep the pipe from freezing, even when it is extremely cold. If you do not have a crawl space or a basement, the pipes could be underground. In other words, they are completely buried. If your water pipes are frozen, call a plumber. Using a heating pad on frozen pipes will take longer to melt, but it will allow you to see exactly when the toilet starts to empty.

It is dangerous to try to thaw pipes with an open flame. Never attempt to melt a pipe by trying to heat it with a hand torch. This can damage pipes, cause sheetrock to burst, and cause other hazards in your home. Extreme heat can also cause pipes to become damaged or cause sheetrock to catch fire.

If your attempt to thaw frozen pipes doesn’t work, call in experts who will do the job quickly and safely. Even if a frozen pipe in your house bursts, most homeowners’ insurance policies will pay to repair the damage. Don’t take any chances that could put you, your family, or your house in any danger.

Can you put antifreeze in your toilet?

Allow water from the toilets and pipes to drain out of the tanks. You can put some propylene glycol (not ethylene glycol, which is toxic and used in cars) in the tank to mix with the water in the rest of the water tank. Add 1 pint of antifreeze to each toilet bowl.

Will pouring hot water down the drain unfreeze pipes?

Always do not try to warm water by pouring hot water on frozen pipes and using a blowtorch to warm them. Hot water that is poured into a pipe will cause it to expand and crack, and heating it with a torch can cause the pipe to explode. Do not try to smash pipes by hitting them with a hammer to try and break up the ice, as doing that will cause the pipe to crack.

Should I turn off the water if pipes are frozen?

You can immediately switch off the water at the main shutoff valve. Once all the ice in the pipes has melted, open the faucet so water can flow freely through the pipe. This will melt the ice faster and cause the clog to clear faster.

Where do you put antifreeze in a toilet?

Will pipes unfreeze themselves?

Pipes will eventually defrost on their own, but this takes a long time, and the damage to the pipe could become much worse before it thaws. This could eventually cause a pipe to burst and cause more damage than it already does. It’s better to act now and stop freezing pipes than to allow them to remain frozen for a long time.

If you’re properly prepared for winter problems around the house, they will be a lot easier to solve. We want you to be prepared for everything from frozen toilet pipes to ice dams on your roof. Stay warm, watch the weather for the next few days, and always call for help when you need to have a frozen pipe cleared.

Smith Edwards is a seasoned plumber and blogger who covers everything about bathroom remodeling ideas and basic plumbing DIY projects.