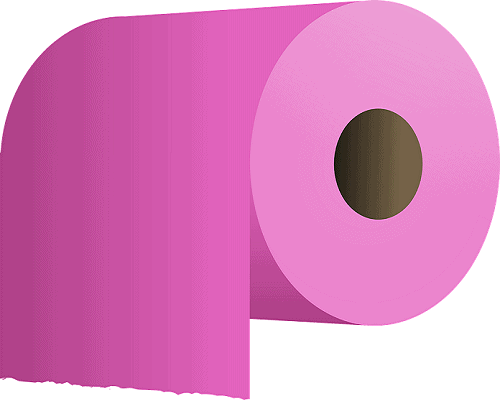 Many of us are accustomed to white toilet paper. But if you’ve ever traveled to France, you might have noticed their toilet papers are mostly colorful. But why is French toilet paper pink? The color of toilet paper is often a topic of discussion among tourists coming to France. These colorful toilet paper are also known as PQ (pécu), which is short for “papier cul.” Although there are also white toilet paper rolls available in France, many of them are often colorful, regardless of where you visit in the country.

The Origin Of Pink Toilet Paper in France

The history of colorful toilet paper goes back to China in the 6th century. However, PQ only became widely used in France in the 1960s. Of course, grayish and pinkish toilet paper has been around since the beginning of the century, and it wasn’t just a commodity.

Toilet rolls were put aside for those who wanted to feel very comfortable while using a toilet. Newspapers were used for a while before people started to use other things. Toilet paper was made from wood pulp when the first toilets were built, but environmental groups changed things after WWF started protesting. After some very public protests, manufacturers began to make toilet paper rolls from recycled paper.

At the onset, the toilet paper looked greyish. So the manufacturers tried to dye or bleach it, and it didn’t work. But as time went on, people started to use more bleach or dye since grey toilet paper tends to look less appealing. However, it is not unusual for toilet paper in France to be pink because it is a regional preference.

Finding out who started this trend is hard. Germans are particularly fond of toilet paper with a graphical design, while Americans prefer it to be white as it looks nice. However, French people have stuck to pink toilet paper.

French people always used pink toilet paper as the world went for white toilet paper. They believe it has always looked beautiful and that a lot of bleach will harm the environment. No matter how hard you try to convince the French, they will not buy toilet paper in white.

Why French Toilet Paper is Pink To Date

Sanitary marketers chose the color pink because the French people associate it culturally with purity. It’s also associated with the softness of healthy young skin. Besides France, Germany is another country where colorful toilet paper is common. You can find toilet paper rolls with patterns, usually flowers. Some countries, however, favor white paper.

White toilet paper is very common in the US and is also used for purity purposes. However, it is less environmentally friendly. Many brands now also offer recycled paper in various shades of brown, as they believe it to be greener. Many varieties of toilet paper are available in France, and they are sold as a whole pack or as a stack of leaves, something you may never see in the US.

How Much is Pink Toilet Paper?

You will pay more for pink toilet paper when you buy it in France. But since white toilet paper isn’t common, you are left with very few options. But as you may have noticed, toilet roll designs are constantly changing. Recently, new product lines have been added to the packs. There are also some very attractive patterned toilet papers available on the market, such as those that are three-ply and even those that have prints on them. Although toilet paper has evolved in many countries worldwide, do not expect the French to change their designs for toilet paper.

Colored toilet paper was popular in the US until its popularity was affected by poor sales figures and other concerns. For various reasons, some people are concerned about the safety of using dyes in toilet paper. Fortunately, in the US, toilet papers come with different designs that are more appealing to customers. Unique designs are also a way for toilet paper manufacturers to differentiate themselves and appear very elite. When you see colored toilet paper, you will love it, even though they are rare. But note that colored toilet paper is often more expensive.

How Do French Call Toilet Paper?

You must know what to say in French when you want to ask for some toilet paper. Toilet paper is called papier toilette. But just like any other language, French grammar rules make it difficult to understand what to say. It is simple to say PQ or “papier toilette,” because they mean the same thing.

Pink is just a regional preference in France. The French people wanted toilet paper that looked nice in their bathrooms. Although it’s hard to believe that anyone would want to paint their smallest room pink, that rule might probably hold true in France.

Some people complain that putting dyes on sensitive areas can irritate the skin, and there are also environmental concerns. It’s really debatable whether dyeing toilet paper pink is better than bleaching it to produce white toilet paper. Although it’s more expensive, pink toilet paper has been popular for many years. However, unbleached toilet paper is not widely available because consumers seem to dislike the brown color of toilet paper. Ironic really.

Toilet paper is evolving, and there is now toilet paper with perfume, three and four-ply paper, and even paper that glows when lit. There are some really beautiful and exciting toilet paper designs out there, but the pace of change is slower in France. They seem to be happy with their pink PQ.

What Else Do the French People Use Instead of Toilet Paper?

It’s not uncommon to find French bathrooms with a bidet. It is like a bucket that lets you take a bath or shower, but just for your butt. It is very popular in France and other European countries. It’s like a toilet with a spout that lets you drain your wastewater. It is also called a spout. A spout produces a stream of water, similar to a water fountain. This way, the user doesn’t need to use toilet paper.

Squat toilets are used in some French buildings, even though they are not so common. Some buildings still have a loo pan slightly higher than the floor. They were very popular in the early 1900s.

France has very few white toilet papers; most of them are pink. You probably already know why this is the case. French people always do things their way despite the changing colors and trends of toilet paper across the globe. It can be frustrating to learn a complicated language, especially when you desperately need a wad of toilet paper. If you are in France, just say PQ to refer to it.